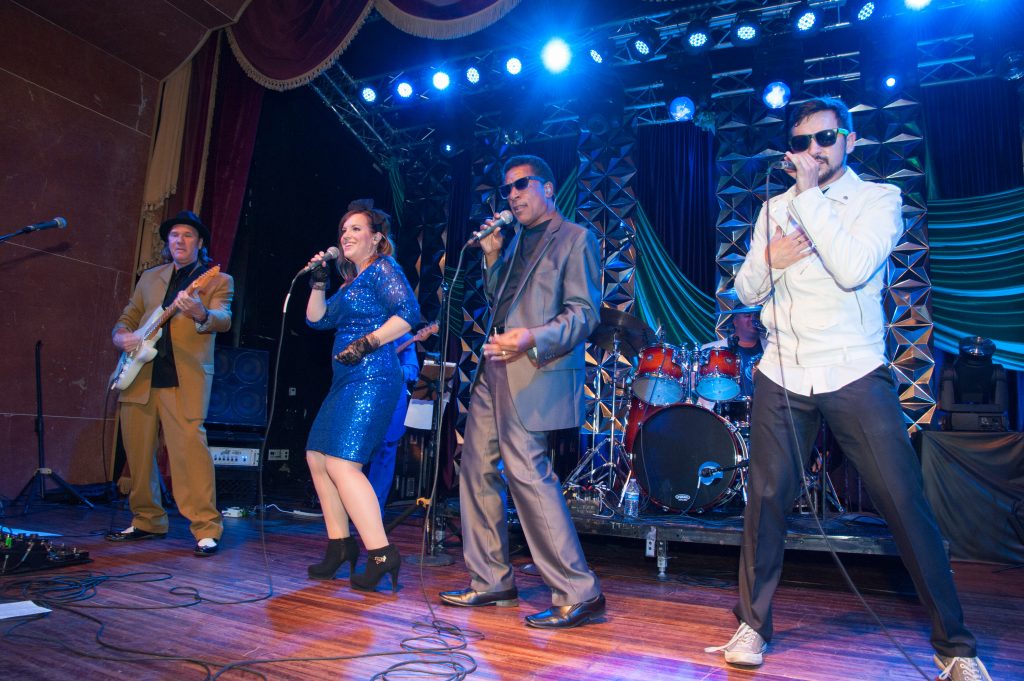 Posted at 15:46h in TMU News by Danielle

Year after year we have the privilege of performing for some of the world’s most incredible givers and philanthropists. We consider it a huge honor to work alongside these change agents. By providing the entertainment experience for their events we share in their commitment to raise the necessary resources to further their honorable missions. 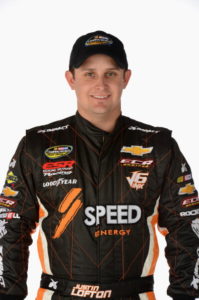 The Justin Lofton Foundation is dedicated to assisting children throughout the Imperial County. The foundation specifically concentrates its efforts on assisting organizations providing a safe environment for children to learn and to challenge themselves. In January we traveled to Brawley, California to play for the 6th annual Justin Lofton Charity Golf Tournament at the Stockmen’s Club. To date this golf tournament has raised over $150,000 dollars, benefitting the Boys & Girls Clubs of Imperial Valley.

In April, we performed for Horizon Prep’s annual fundraiser at the Del Mar Country Club. The vision at Horizon Prep, a co-ed, non-denominational college preparatory day school, is to prepare a generation of mature, academically advanced, physically equipped and socially developed individuals for a life of opportunity and service.

Around the same time, the Rancho Bernardo High School Music Boosters Association called on us to play their event at Maderas Golf Club to support the music programs at the high school. This group of dedicated volunteers holds a special place in our hearts, as our very own Mike Holguin is an alumni instructor from this school. We’ll be back again next year to generate support for the marching band, orchestra, and color guard.

As the weather began to warm up and head into summer, it was time for Fiesta at Ascension Catholic Church! It’s been a very fun event for us to play each year and bring our families along as well. It is by far the biggest community party in Tierrasanta. Fiesta is the oldest and most popular social event hosted by the Church. Dating back to 1981, Fiesta is a three-day fundraiser during the first full weekend of June. This mega event involves the entire parish and draws thousands of our neighbors who join for a weekend of music, dancing, a wide variety of ethnic food, and games for the kids, bingo, white elephant sale and a huge bake sale. 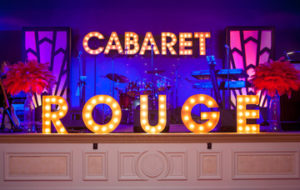 The following week in June, Home of Guiding Hands presented its annual Cabaret Rouge Gala at the historical U.S. Grant in downtown San Diego. The event is held in support of over 1,500 infants, adolescents, and adults with developmental and intellectual disabilities. The evening’s festivities included performances by cancan dancers and live music from The Mighty Untouchables. This was our 5th year playing for the organization. There were fabulous items to bid on, a specialty wine auction, roulette tables, a delicious dinner, and dancing. 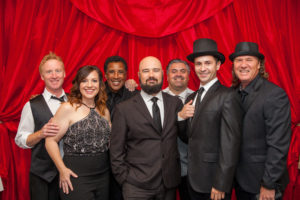 Home of Guiding Hands (HGH) was created as a result of a small, but dedicated and ambitious group of leaders in East County. Since it’s inception in 1961, HGH has provided benchmark programming and housing for men, women, and children with developmental disabilities. They don’t see themselves as caregivers; rather, partners, facilitators, community members and teachers. They’ve evolved from a 14-acre campus in Lakeside, to 31 four to six person homes and community and home-based services throughout San Diego County and Imperial Valley.

HGH is one of the largest providers of supports and services in San Diego County, serving over 1,500 children, adolescents, and adults with developmental disabilities. At HGH, they believe that individuals thrive where they can direct their own lives in a setting that offers a more fulfilling lifestyle, provides individualized attention, increased opportunities for self-sufficiency, and encourages greater community integration and access. HGH raised over $108,000 that night!

And then the next week… 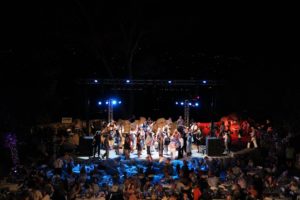 East County’s most recognizable landmark, the cross memorial, and amphitheater atop Mt. Helix, was the site of the 9th annual heART of Mt. Helix event. The Mighty Untouchables entertained for the 4th year in a row!

Mt. Helix Park is one of San Diego County’s most magnificent spots, where people come for spectacular 360-degree views of San Diego. Did you ever think “I wonder what’s up there?” or “Are we allowed to go up? Come on up and experience a magical night on the crest of your very own “mountain peak” at roughly 1300 feet up.

The event featured tastings from local restaurants, live music and art demonstrations, fine wines and craft beer, dancing under the stars to The Mighty Untouchables and bidding on incredible auction items.

All the funds raised went towards supporting the Mt. Helix Park Foundation’s mission to keep the park clean, safe and open to the public every day of the year. 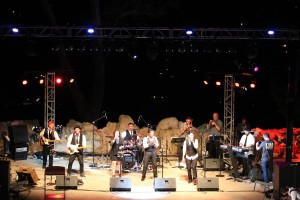 The foundation is the non-profit organization responsible for preserving and enhancing the park, amphitheater and cross memorial on top of Mt. Helix. In addition, the foundation has purchased land next to the original park trust property with the purpose of developing it to supplement park needs.

Since the park does not receive government funding they need public support to operate the facility and to ensure that this historical place will still be here for future generations to enjoy. 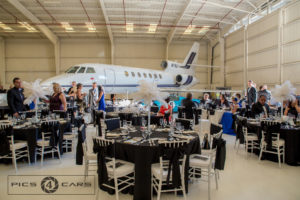 In August we joined the Santee Chamber of Commerce at their first-ever Black Tie Car Show Gala. It was held in a gorgeous private jet hanger at High Performance Aircraft on Gillespie Field.

The gala included plenty of beer and wine, hors d’oeuvres, a seated dinner with gourmet entrees, a live auction, dancing to the live music of the Mighty Untouchables and the opportunity to mix and mingle in black tie attire while enjoying the view of classic cars and modern aircraft in the spectacular hangar of High Performance Aircraft. 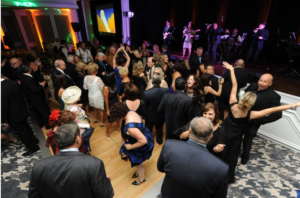 In September we were back at the U.S. Grant supporting the San Diego Police Foundation for their Gold Sheild Gala this time. Their event raised funds for the critical needs and shortages that shrinking budgets no longer cover. They support effective programs that fight domestic violence, online predators, and advocate for better safety measures and practices in our communities. Not only that but they strengthen the mutually beneficial relationship between SDPD and the public it serves.

We once again joined the City Ballet of San Diego at their annual “IlluminAsia” 24th Anniversary Gala. This event celebrated 24 years of performances, education and community outreach at the elegant Hotel del Coronado. 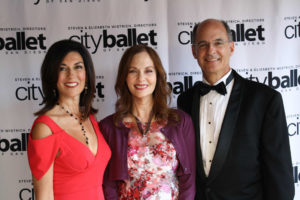 The evening included dinner, dancing, silent auction, and performances by City Ballet dancers, and music by The Mighty Untouchables. There, of course, was a live auction featuring a European Viking River Cruise with round-trip airfare for two from Delta Airlines. This spectacular evening was lead by Gala Chair Rita Steel and Celebrity Honorary Chair Lesley Ann Warren.

Proceeds from the event support City Ballet’s educational and outreach programs benefiting over 10,000 children annually. Since 1993, City Ballet of San Diego has proudly offered a full season of concerts at their home theater, the historical Spreckels Theatre, as well as education and community programs, all devoted to the advancement of ballet as a major art form in San Diego.

City Ballet of San Diego is committed to the same high standards for performances, artistic achievement, and ballet education as other renowned ballet companies throughout the world. And as the major presenter of George Balanchine ballet in Southern California, they now have 19 of his ballets in its repertoire.

City Ballet’s education programs reach over 10,000 school children annually offering in-theater performances and all-school assemblies. Their “Discover a Dancer” program, an in-depth residency program for at-risk youth, is funded by a grant from the California Arts Council; one of only a few arts organizations in San Diego to be funded by the CAC. 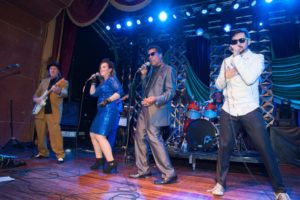 Ronald McDonald House Charities of San Diego’s annual ROMP Gala held a fun-filled, 1980s “House Party” at the Fairmont Grand Del Mar in October with a focus on a serious cause – keeping families together.

The annual gala featured live music by The Mighty Untouchables, gourmet food, and a live auction to raise funds for San Diego’s Ronald McDonald House. The charity helps keep families close to one another and the care they need while their child is undergoing treatment at local hospitals for serious, often life-threatening conditions. Services and amenities include meals, overnight rooms, nap rooms, laundry facilities, child care programs and more to alleviate stress and financial burden while keeping families close to their loved ones. 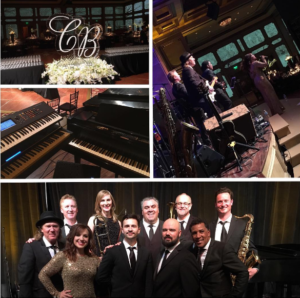 To close out 2016 we performed for the Scripps 87th Annual Candlelight Ball – one of the best-known and anticipated holiday events in San Diego held at the Fairmont Grand Del Mar. This year’s event continued that tradition in support of the acclaimed surgery program at Scripps Memorial Hospital La Jolla. 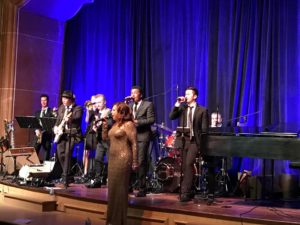 Now in its 91st year, Scripps Health continues to boast some of the most talented, experienced and trusted surgeons practicing today, specializing in everything from gynecologic, neuro-invasive and orthopedic surgeries to minimally invasive and robotic surgery that dramatically reduce or eliminate hospital stays and recovery time. The unforgettable evening included a cocktail reception, gourmet dinner, and dancing.

Once again, thank you so much to these excellent organizations for allowing us to be a part of their story and mission. We salute the great work you have done.

You don’t have to work for the UN, join the Peace Corps, or take volunteer roles for the rest of your life to do well in the world. You can be a teacher, an artist, a MUSICIAN, or a million other paid jobs and still have a positive impact on the world. There are so many ways have a positive impact on the world—we are so grateful to be a family of friends and colleagues who share common values and beliefs to bring out to the world. We hope you’ll join us in contributing your talents and resources to a great cause in 2017!