Celebrating 8 Years Together – This is us…

02 Jan Celebrating 8 Years Together – This is us…

Posted at 14:56h in Uncategorized by Danielle

February marks the 8-year anniversary of the creation of The Mighty Untouchables. We were longtime friends that had dreams of performing together in a supergroup. Our first band meeting was held at Mark Fulton’s kitchen table. Among the original core members of the group, Mike Holguin, Mark Fulton, Leonard Tucker, Greg Merrill and Danielle Tucker all feverishly shared ideas for the project. 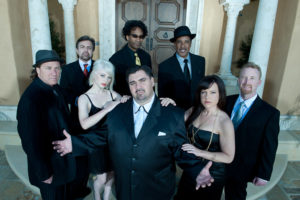 Everyone coming together that night shared similar past experiences working in cover bands throughout the years. We’d all done the bar band scene and knew the group of musicians we’d picked was capable of so much more. Playing stale, overdone songs was a thing of the past. We began building lists of fresh material and classics that people were crazy for and were musically exciting. This band would not be a one-trick pony. We had our sights set on being the most versatile group out there covering everything from top-40 dance, R&B, Motown, classic rock, country, and latin. We would become the band that could do anything – and do it well!

We knew the potential pitfalls and risks that came along with putting together a venture of this kind. Most daunting was the fact that we were hit just the year before with a global financial crisis considered by many to have been the worst since the Great Depression. Companies had pulled the plug on entertaining their clients and employees. In fact, it was considered quite taboo to throw anything that would be considered a “lavish” event. Who would hire an 8-piece band?

Our first stroke of luck came in the form of casino gigs. Talent buyers who had strong past relationships with the group members were inspired by our tenacity and offered us dates at their venues straight away. Those turned into repeat dates and regular stints. Momentum began to grow as the group landed its first wedding bookings and then some small corporate and fundraising events. The paychecks were humble but the payoffs were outstanding.

Honestly, we were having fun. Fearless, we were sure we were in a position to find success in the events industry that was actively rebuilding. What we discovered was that the music, the friendship, the insatiable drive, and the ethics had formed a magic formula in this ensemble. We quickly established an impressive reputation and the calendar filled.

Our bandleader, Mark Fulton, emerged as a voracious driving force behind the scenes. He became known as “HB” – Hustle Boy. Emailing, making calls and tirelessly networking day and night exponentially grew our bookings and revenue.

In a business of this size and nature compromise is, of course, constant and necessary. However, there are key values that the group refused to negotiate on which are attributes of our success. Among those values are complete transparency and a democracy policy. Each member has an equal contribution and say. We have each committed to making The Mighty Untouchables our top priority among all other musical and professional ventures. We very rarely sub out band members and under no circumstances do we send out a “B” or “C” band ensemble. Every show we put on is the tried and true prestigious lineup of members. Most importantly, the integrity of the music takes precedence. We rehearse; we try new material all the time and we constantly go beyond our own preferences. At the end of the day, our show is only our absolute best material and the stuff that works. Our musical director, Mike Holguin, calls it “100 percenters only”.

The year 2014 proved to be the most pivotal for the group to date. Keyboard virtuoso Bobby Cressey and vocal showman extraordinaire Donovan Hurst joined our family. These two young superstars brought a fresh millennial flare and excitement taking the creativity of our show to new levels.

It’s incredible how far we have come now. Several times a week we are booked performing at corporate events for Fortune 500 companies such as AT&T, Toyota, Apple, CAT, Microsoft, Humana, Best Buy, and Intuit. We’re entertaining weekly at luxuriously lavish weddings at the best venues and resorts in the world. In 2016 we played 120 shows.

In our 8 years together there has been a great deal of sacrifice, heartbreak, and cooperation. As brothers and sisters, we have laughed, cried and quarreled. We have learned hard fought lessons and grown together year after year. An unshakeable bond has formed that has become our magic sauce. When the Mighty Untouchables take the stage together this history is the power that shines through. There is no other show out there like ours. It’s remarkably different and we’re proud of the outstanding product we’ve put together. Our clients and fans receive nothing less than musical excellence – heart and soul.

The flame is hotter than ever with The Mighty Untouchables. We are beyond optimistic and driven towards the next eight years. We are shooting for more and more fabulous events with our treasured clients. Our sites are set on traveling nationally and internationally the coming years. More creative ventures in the studio are in the pipeline as well. It’s been a great eight! Here’s to many, many more!